Reflecting On My Time In Care

The first time I was fostered was when I was a baby. My parents were young and finding it challenging to balance work and studying at university, so I ended up being fostered by a lady my mum was doing her nursing training with. They became good strong friends, and she ended up becoming my godmother. I was fostered by them for less than a year because my godmother became pregnant, which created more and more pressure.

I had to move from there and I was sent to Ghana to live with my father’s family until just before my sixth birthday. I came back to the UK and stayed with my parents for the next four or so years, but there were a lot of different issues and it didn’t work out. So I went into a children’s home for a short time, and then to a set of foster parents whilst Social Services looked for a long-term placement for me. I stayed with this family for about a year, but it wasn’t the happiest experience. Their youngest son was five or six years older
than me and he bullied me because I was younger, and he had a problem because I was of a different race. It was difficult and I was moved from there into a couple of other children’s home for a year or so.

Eventually I was sent to a Jamaican family who are the foster parents I ended up settling with and I stayed with them until I was 19. I felt comfortable here, there was a lot of love, and they buffered me from a lot of the pressures that social services can put on young people. As an example, I got a paper round and then I got a job in a supermarket when I was at school. Because I was getting a little bit of money Social Services felt I should pay something towards my keep. My foster parents didn’t agree with this, so we came up with an agreement not to tell them. This helped me see that my foster parents were in my corner and they were very supportive of me. They gave me the space to do what I wanted, within reason, but I wasn’t really a child that caused problems. I was quite responsible. I felt that I had to be independent because I was the only one that had my back, so I had to look after myself. I left my foster placement at the age of 19 and went into shared accommodation sourced by Social Services.

When I reflect on my time in the care system, whilst I feel that I had a lot of love and support from my foster parents, I still think it would have been better if I had received some kind of mentorship. It would have helped me see that I had options and I could direct my life in the way that I wanted it to go. When I looked at my friends circle I noticed their parents suggesting options, trajectories and directions they could go in, and I didn’t have that. I often think that it would have been great if someone sat me down and helped me realise that once you leave the care system you are going to be on your own, and get you to start thinking about the quality of life you
want to have and how you can achieve this.

When I left the care sector at the age of 21 one of the biggest challenges I had was finance, and without finance your options are limited. I knew a lot of young people from children’s homes and we kept in touch because they were the closest thing I had to a family. Some of them were criminals and they weren’t necessarily the best people to be around, but at 19 I didn’t really see it like that. Some of the choices I made were influenced by being around these people. When you don’t have any direction, you are just going to follow and sometimes that leads to trouble.

As an adult, I recognise the experiences we have when we are younger shape who we become. I believe that everything happens for a reason. There’s always value and wisdom in an experience, and it’s about making the choice to find that wisdom. I don’t now look at my experience as a youngster as negatively as I did back then, and I feel it’s my mission to help other people overcome obstacles and barriers that they don’t need to experience if they have the right guidance. 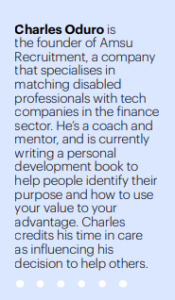 HOW WE CAN MAKE THINGS BETTER FOR FOSTER CHILDREN

AS SOON AS THE YOUNG PERSON comes into care I think that programmes should be put in place to help them to overcome the emotional challenges they are experiencing. I think that a lot of work should be done around self-worth and self-value. Young people should know that they have choices, and should be taught that a life of mediocrity is not acceptable. I think that if programmes of empowerment are put in place you are going to see very different results, and more positive, constructive contributions made to society by young people in care.

I also feel that the way Social Services and the whole support structure engage with young people needs to be looked at. I had a number of different social workers, and one of the things I felt could have been better was relationship building. It felt like they were just doing a job to pay the bills. When you’re young you respond to emotional connection, and if you don’t have that with a young person it’s very difficult to positively influence them. One of the things that I saw with social workers is that there’s no connection a lot of the time.

When the child is in care, they need a loving environment – that’s what they would get from their
family. I understand and appreciate that when people are looking after you that they are not your
family, they are doing a job, and there are certain rules and regulations –there’s a line that you can’t
cross – but within that line there are still ways to connect on a deeper level.

One of the key things is people sharing their stories and different groups interacting. The more we get to know each other and connect with each other we stop seeing the whole race thing, but we must give ourselves the opportunity to do this and it starts with engagement. This has to be done from an authentic place. It can’t be done because the rules say we have to do it, because if we just do things based on rules all we’re doing is acting. It’s about mixing, sharing stories, and spending time together. In the care system, when issues of race come up they should be addressed in a pragmatic way, but it’s important to help people see and understand each other’s perspectives. So if programmes were put in place to achieve that outcome I think that’s a good place to start.
With my second set of foster parents, part of the issue with the race thing was that my foster brother was 16. When I ended up in that household I think that part of the reason he expressed racism to me was because he didn’t want me there. This wasn’t necessarily because of my race, but because things were changing for him and he had no control over that. He was the youngest and he wasn’t always listened to, and he directed his anger towards me. I think that when foster carers are choosing whether they want to be carers it would be helpful for them to look at their personal ecosystem and how having someone in their household is going to impact the different legs of their family set up.

Removing Stigma and Shame from Mental Health
May 11, 2021

Why Are There So Few Disabled Foster Carers
May 4, 2021